***
gplus
Digg
Gshare
Reddit
facebook
twitter
Pin It
Beauty and the Beach is the 18th episode of Season 1 of the Pokemon Anime. It was aired in Japan no problem but didn't originally got aired in the United States due to a number of questionable scenes (in the eyes of those who decide what people should and shouldn't watch).

4Kids Entertainment who were at the time responsible for the airing of Pokemon in the USA decided to skip this episode entirely. A few years later airing an edited, cut down English version of the episode on June 24th, 2000 on the Kids' WB channel as a "lost episode" - to this day it remains the only time the episode has been broadcast in the USA, the English dub has never been broadcast outside of the USA.

The episode is said to contain two questionable scenes and one 'no chance are we airing that' scene, so lets take a look:-

Questionable scene 1: Ash and Brock are playing in the sea at Porta Vista when Misty arrives clad in a red bikini, the camera pans slowly from top to bottom and Ash and Brock cast a very admiring glance her way... to which she responds "Whats wrong? Why are you looking at me like that?" 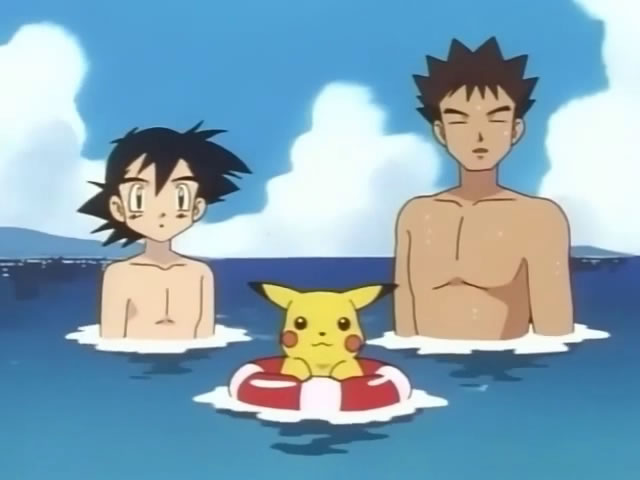 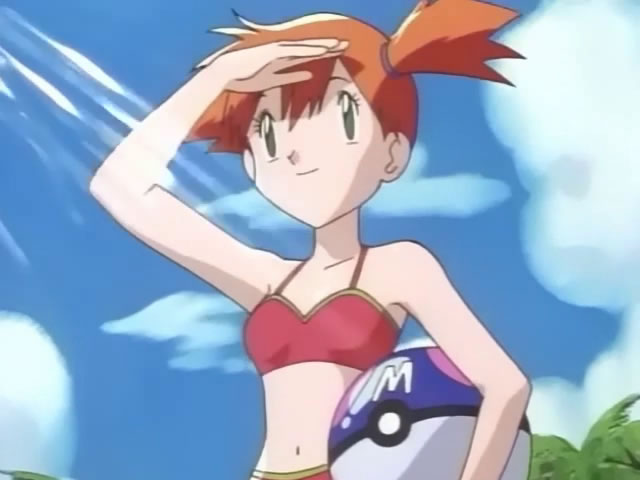 I don't know if theres something wrong with me, but while I was watching this I was personally thinking how cool it was that Misty had a Master Ball themed Beach Ball...

Questionable scene 2: When Moe approaches the group as they crashed his boat into his pier, Ash uses Misty as a human shield as he was getting shouted at, but the old man takes a bit too much of a liking to her.. 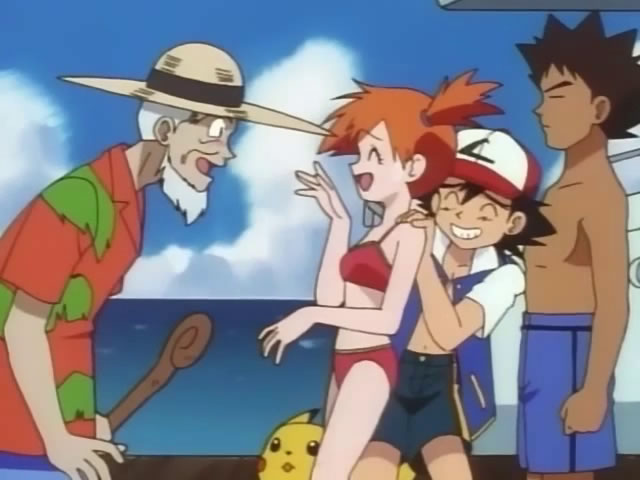 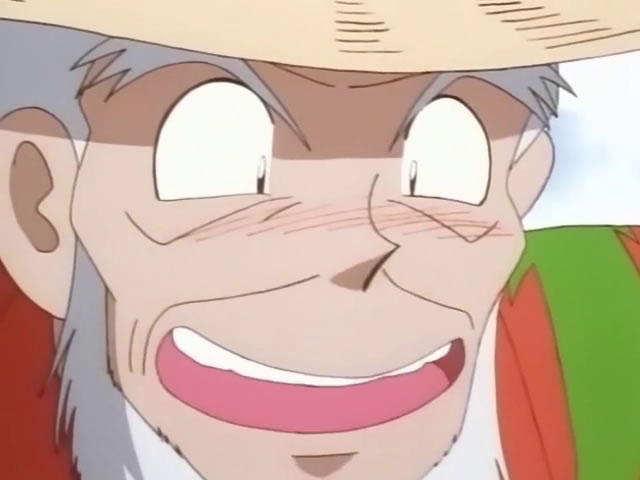 The "No Chance are we airing that scene": This scene aired no problem in Japan, but the western censoring agencies decided we weren't mentally capable of watching it without being scarred for life. Basically the scene(s) consist of all the female characters entering the Porta Vista annual beauty contest. Misty enters as do Jessie and even James who just happens to be donning a pair of artificial inflatable breasts!

Jessie and James approach Misty on the stage and James makes a point of really showing off his assets for humorous effect, shocking and disturbing Misty a little in the process. He then goes on to inflate them even further and says to Misty "Maybe, one day when you're older, you'll have a chest like this!" (of course it was said in Japanese, but this is the translation). 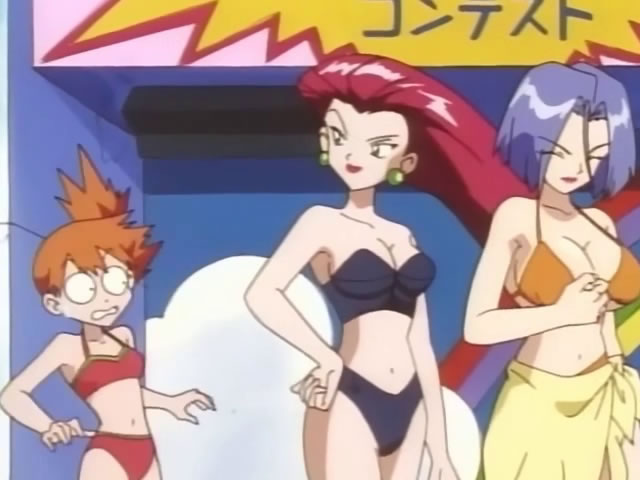 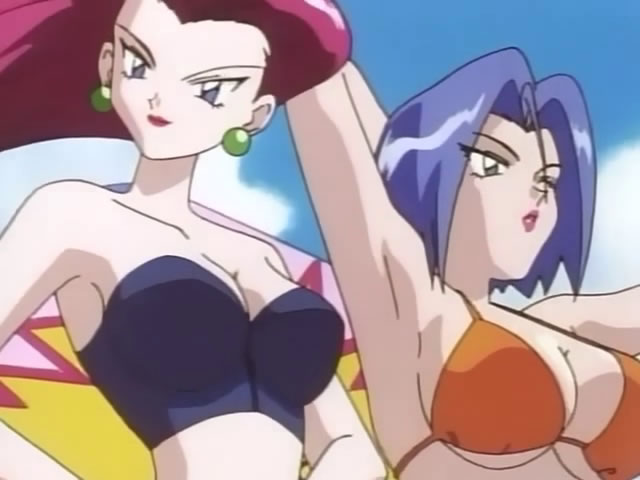 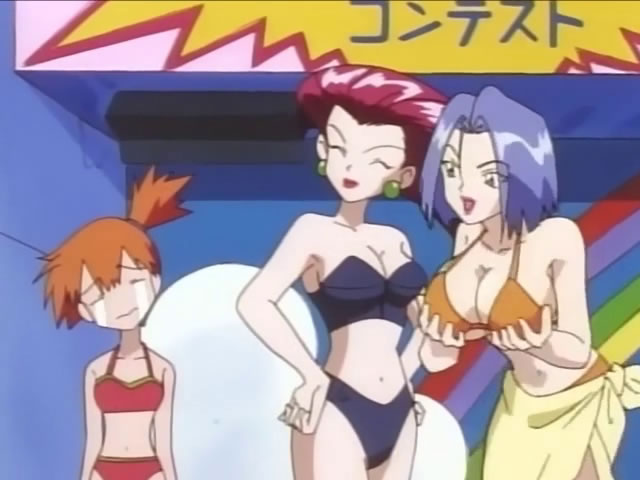 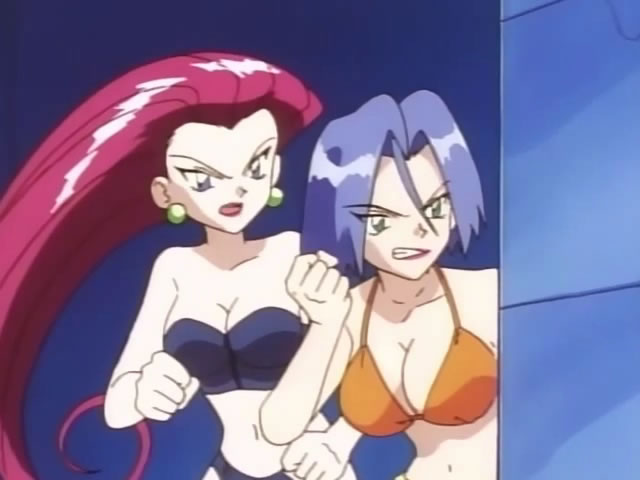 The English dub that played on Kids' WB I mentioned contained the two questionable scenes but all 40 seconds of the footage of James in a Bikini was completely removed. Which looked a bit silly as it just jumped from scene to scene for a short time. 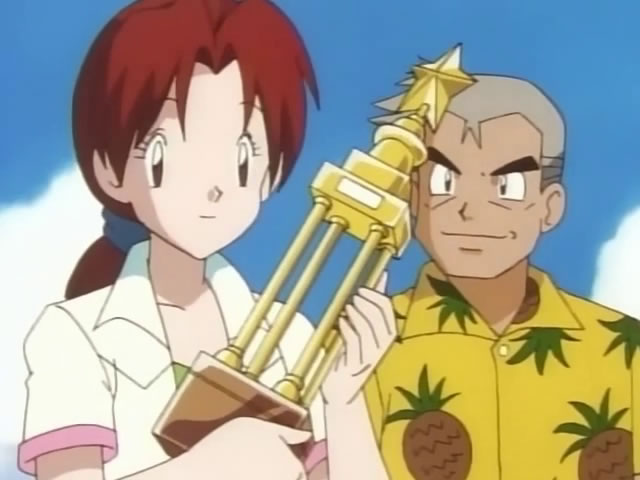 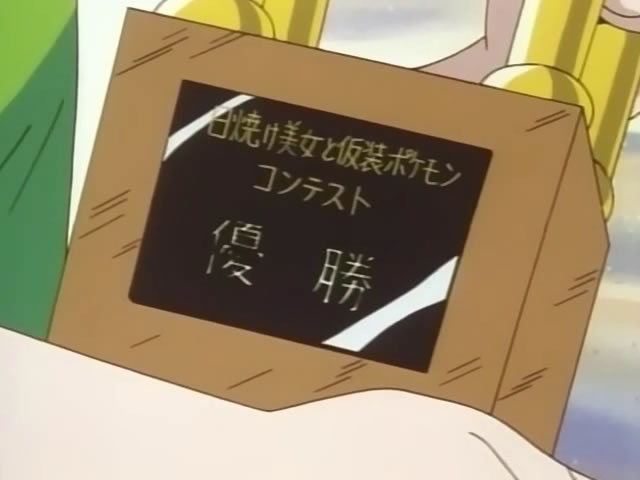 The inscription on the trophy held by Delia at the end of “Beauty and the Beach” reads:

At first I jumped to the conclusion that Brock awarded the trophy to Delia, but Delia never entered the contest and had no Pokémon. If Gary had won it he would have just taken it home, but the point is moot since he didn’t have any Pokémon either. If anyone else had won, they wouldn’t have given it to Delia.

That leaves only one conclusion. Misty won, and not having anyone else there, gave it to Delia for safe keeping. This also means her sisters would probably never find out about the trophy. It would depend on how close Delia’s and Misty’s relationship, whether or not Delia knew about her family. Even then Misty might have decided to have Delia leave it at her house instead of taunting her sisters with it. The problem is that the trophy is never mentioned again, and her sisters never brought it up. So we will never really know unless someone at TCP tells us.

Anyway, so thats why this episode was so scarcely broadcast on TV and why so many scenes were cut, you may note I have referred to these as 'Questionable Scenes' etc, thats not my opinion I'm just relaying the opinions of the powers that be, I'd have aired it no problem ;-)

Want to read about another banned episode? Check out our article on why Pokemon S1 E35 The Legend of Dratini was banned.