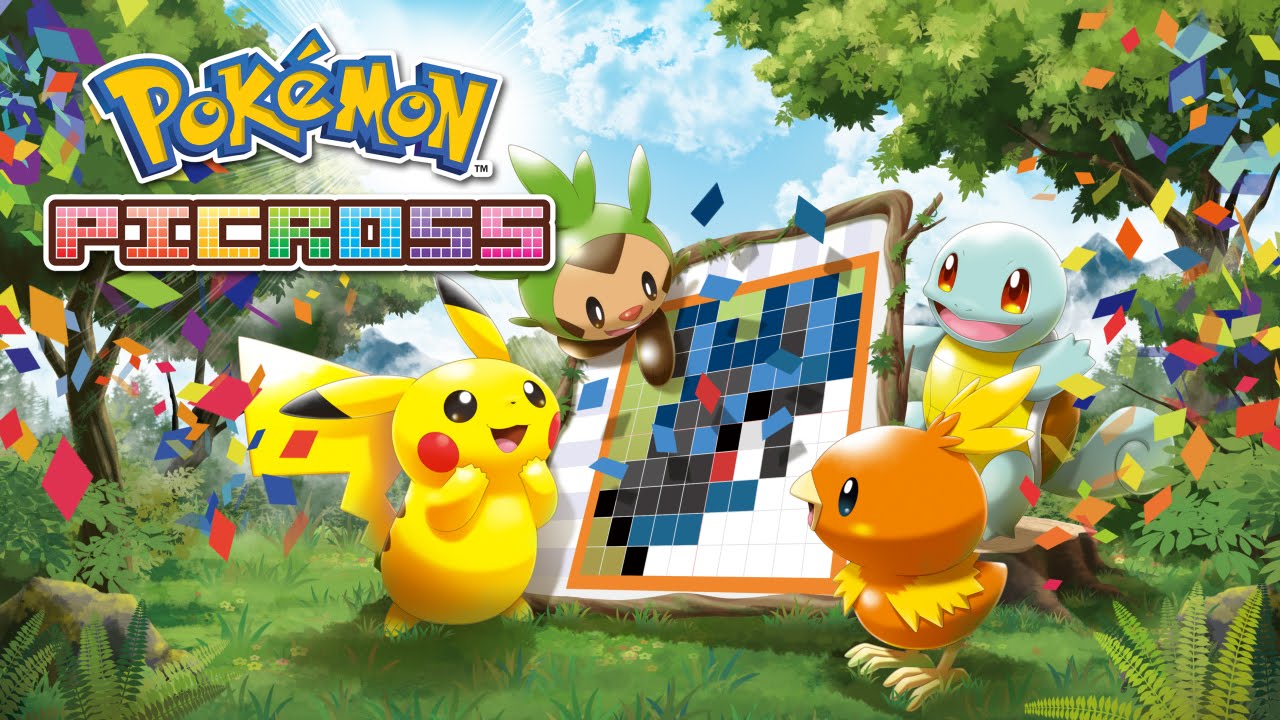 "Want to play Picross with a bunch of silly rules and restrictions?"

I've played plenty of Picross titles from Nintendo, and it's hard to go wrong with any of them. After a failed attempt earlier on, a Pokémon Picross game was recently released to the 3DS eShop. How does this free-to-play (free-to-start) experience play out?

Picross is a straightforward puzzle game. Players are given a grid and have to chisel out certain squares in this grid based on numerical clues along the rows and columns of the puzzle. A “2” means that two consecutive pieces must be chiseled out in one row or column. A “1 3” means that one mark is chiseled out, then at least one blank / empty space, followed by three consecutive squares. Following these clues and chiseling out the correct squares reveals a picture. Nintendo has been making games like these since 1995, so there is a lot of history here. Pokémon Picross plays with the formula a bit.

Almost every puzzle in this collection is a Pokémon. When players complete a picross puzzle, they'll capture that Pokémon, and it will become part of a player's collection. Up to five Pokémon can be taken into each picross puzzle, and each one has different skills that can be used to help clear puzzles later on. This can include checking for accuracy, filling in random tick marks in the puzzle and filling in entire rows and columns. Some Pokémon are better than others; some can freeze time longer than others, for example, or can unveil more squares in one of their Reveal attacks.These skills can generally be used once per puzzle and require recharging. Though the puzzles are set up so experienced players probably won't need the assistance, it's great for beginners to get started. Players are encouraged to use Pokémon, too, because there is a reward with in-game currency for using certain Pokémon types or specific attacks on certain puzzles. These are clever mechanics that add an extra dimension to the puzzle-solving; there's a decent strategy for making the best roster, too, because some Pokémon can only use their skills with puzzles of specific dimensions.

Playing picross in this game requires two types of in-game currency. The first type of currency, Picrites, is earned through completing puzzles and beating in-game missions. The Picrites are used to add more slots to your available roster, unlock new areas and increase / replenish your energy gauge. They can also unlock new modes and to Mega Evolve some Pokemon. What is the energy gauge, you ask? Well, each tick mark is worth one unit of energy (aka a Pokémon's HP). Each puzzle has an amount of correct tick marks, so each puzzle costs a certain amount of energy. Energy can be replenished slowly over time and can be refilled in bulk with Picrites. The game offers a big frontload of Picrites through the tutorial levels to get players started (well over 150), but unlocking new areas costs several dozen Picrites and leveling up your stats (like expanding the amount of Poke&eacute;on you can take into a puzzle) can cost several hundred. Picrites can also be purchased in bulk from the eShop with real cash. See where I'm going with this?

Players will inevitably come to a standstill if they don't buy more Picrites with real currency, where they don't have enough Picrites to replenish their energy gauge, and not enough energy to complete a puzzle. There are big pay walls to unlock new worlds and unlock certain modes as well. With this model, I'm not hindered by my inability to beat the puzzles; I'm stuck because I don't have enough HP to make tick marks in the puzzles. I'm at a barrier because I can't afford to continue. Puzzles will have to be quit half-way or outright skipped because plays run out of Picrites, and players can't get HP back for incomplete puzzles. It's regenerated at about one HP per minute, so players can go at it for a certain amount of time to regain enough energy to complete five or six small puzzles, in order to do the whole thing all over again. This momentum slows down as the starting balance of Picrites depletes; larger puzzles mean that players can only finish a few at a time before the energy gauge is depleted. There are 300 puzzles in Pokémon Picross, so this can get old fast.

I fell into the trap of leveling up my Energy Gauge, and players are forced to add additional Pokémon slots to their fighting roster to earn certain Picrite bonuses. However, at the same time, puzzles become so big that players won't have enough energy to complete them and will be forced to pause puzzles half-way through. Players must use their skills, too, and completing missions is the only way to earn enough Picrites to progress at any semblance of a fair pace. Unlocking new worlds costs n+10 Picrites, so new worlds will end up costing well over a hundred Picrites very early on. There are daily challenges which net a small handful of Picrites, but players will have to play several days' worth to have enough to unlock a new world.

There are one-time offers to buy big amounts of Picrites in bulk, to entice players to keep buying, but it's all a rat race. Buying the maximum amount of Picrites, to max out everything and have unlimited Picrites from there on out, costs $24.99 American. Because I'm a huge fan of Picross, I would have probably purchased this game outright if it were a physical release, without this microtransaction nonsense, for $30. I suppose you can do that here, too, but the problem with digital releases is that you get none of that money back, unlike getting a physical copy and selling it when you're done if you wanted to. The microtransactions and deliberate pacing of Pokémon Picross is clearly for slowing players down and to nickel-and-dime them. It's not even about doing puzzles featuring the Pokémon you like and picking what content you want to cover; the game is linear and, as far as I can tell, there's no rhyme or reason to the arrangement of the puzzles. I like Picross very much and I'm not even a fan of Pokémon, but I understand that Pokémon Rumble World operates much in the same way. This is a case of current gaming trends seeping into a well-established gaming formula.

The satisfaction of finishing a difficult picross puzzle is still there. The way Pokémon are implemented into the Picross formula is admirable, even innovative and rewarding. Pokémon Picross has a clean interface, fun sprite-based graphics and a pleasing soundtrack. There are some fun bonus modes, too, like one from the Picross e-series where number clues are clumped in multiple rows and columns at once and the chiseled-out squares all have to line up with each other. There are some great ideas here, but they're wrapped in a confusing and unintuitive package. Plus, the game forces players to use the stylus to choose Pokémon and navigate the options menu. Players can't just play with the d-pad, which should have been an option.

If you're just looking for straight-up picross, there are boundless opportunities elsewhere, on Nintendo consoles and elsewhere. If you can't take the microtransactions, then Picross DS is just a few bucks and features plenty of puzzles with no microtransactions. The Picross-e games are fun in short bursts and offer some challenging puzzles and, heck, Picross 3D, the best out of all of them, is less than five bucks now. If you're clamoring to solve a picross puzzle with Pokémon in it, this does just that.

If it's worth it to you to do the full game unlock at the start, then this could be an excellent game for you. To me, however, this gameplay model does not apply well to this type of game (though selling this as a retail copy would have likely spurned a lot of people off), so it is up to you whether you'd like to take the year or so it would to unlock all the content naturally as a free-player or pay the $24.99 to unlock the full game.

Regardless of my initially low score, I decided to push on in this game. I really shouldn't have given such a low score because the game is - and be completed - for free. Yes, it would take about a year to beat the game if players choose not to pay anything, but at least that keeps players coming back and keeps the game portioned out well. It takes about nine days' worth of daily challenges to get enough Picrites to unlock a new world, so it really isn't so bad. I would still recommend Picross DS or Picross 3D over this title, but the puzzles are still fun to solve despite a microtransaction-heavy exterior.