Pokemon Snap is a first person and simulation spin-off Pokémon game, released on Nintendo 64 (and later on Wii, Wii U VC), portraying the Pokémon in 3D while they are in their natural habitat. The game offers a completely different style of gameplay to the rest of the Pokémon games which mainly focus on battling and catching Pokémon. In Pokémon Snap the famous Professor Oak asks the Pokémon photographer Todd Snap to assist him with his Pokémon Reports by taking pictures of the different Pokémon species inhabiting Pokémon Island.

At Professor Oak's research hub, the player selects the level they'll explore along with their different features. As Todd Snap, the player travels throughout the levels with the help of an amphibious buggy, the Zero-One that has three different forms for air, on land and on water travel and which moves them in a linear directions, just like in rail shooting games, while Todd Snap takes pictures of the Pokémon available in the area. Todd starts out equipped only with his camera, but gains different new items as the game progresses. These items can affect the Pokémon differently, and are the key to unlock alternate routes and hidden Pokémon. Thus, the player has to re-visit some of the levels to uncover photographic opportunities they missed due to the lack of items. Moreover, up to 60 pictures can be taken per level.

Once a level is finished, the player selects the best picture for each Pokémon. These pictures are then rated by Professor Oak and associated to his Pokémon Reports. The rating will depend on different factors such as: how well the Pokémon was captured within the frame and the Pokémon pose and size. In fact capturing a Pokémon while it's doing a special pose, like the surfing Pikachu, will award the player extra points. The game also lets the player mark pictures through the "Album Mark" feature, which adds them to a personal album that they can show later on to their friends. Aside from Pokémon pictures, Todd is also asked to photograph the different Pokémon Signs throughout the island. Collecting all the signs, will unlock the location for the rarest Pokémon within the island.

Pokémon Island is home to more than 60 different species spread out over several distinct biomes, from a piping-hot volcano to a relaxing river. You’ll find certain Pokémon unique to each location, like a Lapras going for an ocean swim or a Koffing lurking in a cave. You’ll have to keep your eyes open because Pokémon could be anywhere! To make your Pokémon Island photo safari easier, you’ll travel around on the ZERO-ONE, an all-terrain vehicle that will allow easy access over ground, water, and air so you can get close enough to snap a photo of the Pokémon. 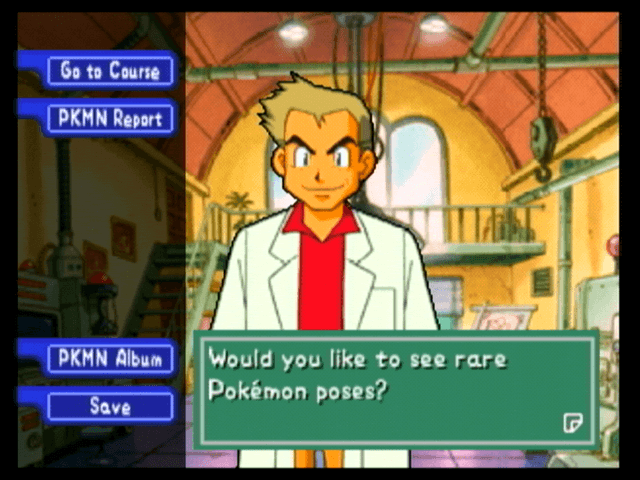 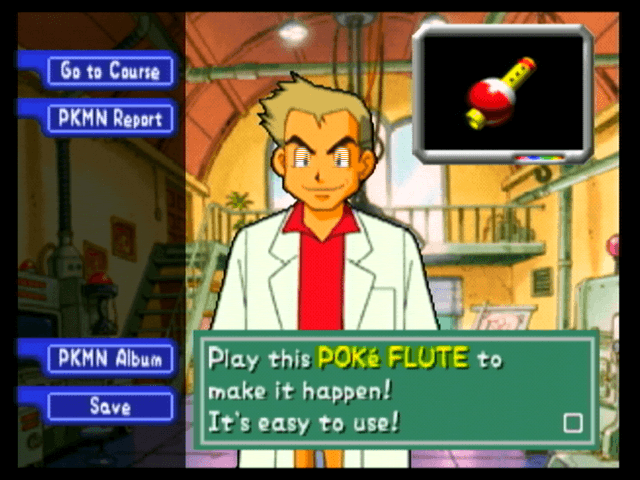 Professor Oak explaining the purpose of the Poké Flute.

Can I catch em' all?

There are 6 Pokémon that appear on signs: Kingler, Pinsir, Dugtrio, Koffing, Cubone and Mewtwo. Only Dugtrio and Koffing are physically present in the game, while the rest of the Pokémon featured on the signs aren't. 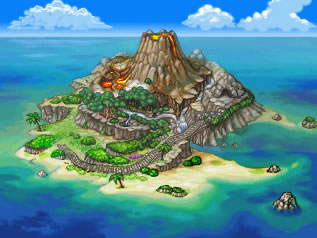 The game takes place mainly on a volcanic island called Pokémon Island. Although there are different signs showing that the island was once inhabited by humans, only wild Pokémon now reside in it, including the three legendary birds and Mew. Within the Island, the player can venture through 6 different locations and a final hidden one:

At the beginning of the beach, there's an arrangement of rocks covered in moss, that can be viewed as Kingler from a certain angle. It's the Kingler Rock Pokémon Sign. There's also an intact surfboard near the course. If a Pikachu is lured to it, it will ride it as if it's surfing. Taking a picture of it will earn the player 1000 bonus points.

The Tunnel - A dark and long tunnel residing at the foot of an active volcano and that is home to the following 12 Pokémon:
Electrode, Pikachu, Zapdos, Zubat, Diglett, Magnetimite, Electabuzz, Kakuna, Magikarp, Haunter, Dugtrio and Magneton.

If the plant is reactivated, the spotlight at the last chamber of the tunnel will project a shadow resembling Pinsir and which is the Pinsir Shadow Pokémon Sign. There's a Zapdos egg within the Tunnel that is hatched with a Pikachu's thunderbolt. Once the Zapdos hatches, it will attack the generator and bring the power plant back to life. There's a passageway at the end of the tunnel blocked by rocks. Disturbed a nearby Electrode will force it to explode and clear the way, which leads to the Volcano area.

The Volcano - The volcanic home to 10 Pokémon, most of which are unsuprisingly fire types, but Magikarp found his way up there too.
Rapidash, Charmander, Charmeleon, Growlithe, Charizard, Vulpix, Magmar, Moltres, Arcanine and Magikarp can all be found at the Volcano.

A volcano splatter coin can be found at the beginning of the level. It will unleash smoke resembling Koffing if a Pester Ball is thrown into its crater. It's the Koffing Smoke Pokémon Sign. When the egg is knocked out of the way of the Zero-One and into the lava, Moltres will hatch.

The River
A flowing river surrounded by a thick forst and which is home to 12 Pokémon:
Poliwag, Slowpoke, Slowbro, Metapod, Porygon, Magikarp, Bulbasaur, Shellder, Vileplume, Psyduck, Cloyster and Pikachu.

In the middle of the level, there's a sleeping Vileplume emitting a poison cloud. If it is awaken with the flute, the cloud will disappear and a tree looking like a Cubone will be revealed. It's the Cubone Tree Pokémon Sign. There's a button on the riverband at the end of the level, and a camouflaged Porygon near it. If the Porygon is hit with a Pester Ball, it will jump on the button and open the pathway to the Cave area.

In the Cave's third chamber, there are several crystals glowing in the dark. If photographed, the photos will show a strange aura near the crystals resembling Mewtwo. It's the Mewtwo Constellation Pokémon Sign. Making Jynx dance with the Poké Flute helps Articuno's egg hatching. If the Zubat carrying the Pikachu is hit with a Pester Ball, it will drop it. The Pikachu will drift down using balloons. Taking picture of it earns the player extra points. Rescuing Pikachu and hatching Articuno will allow the player to see the Pikachu on Articuno's back next time. Another picture opportunity to earn extra points.
Saving the Jigglypuff by hitting the Koffing with a Pester Ball, will make the Jigglypuff go on stage. Once more, a photograph opportunity for extra points. Moreover, saving all the Jigglypuff will play the famous Jigglypuff song, at the end of the cave.

The Valley - A beautiful valley with a river flowing through it, which is also the home of the following 13 Pokémon:
Squirtle, Dratini, Sandshrew, Geodude, Magikarp, Staryu, Dragonite, Goldeen, Mankey, Sandslash, Graveler, Gyarados and Starmie

At the beginning of the level, three mountain peaks can be seen. The peaks look like a Dugdrio. It's the Mt.Dugtrio Pokémon Sign. The floodgate blocking the way to the lagoon can be open by hitting a Squirtle with a Pester Ball, who will then knock a Mankey into a button, opening the way.

A rainbow colored cloud that is the seventh and secret area of the island and the home of the rarest Pokémon; Mew.

This Area is unlocked by gathering pictures of all the 6 Pokémon Signs. The player is unable to take clear pictures of Mew due to the Bubble shield surrounding him. Throughout the level Mew will toy with the player, giving the opportunity to hit his Bubble Shield with Pester Balls. Once the shield is broken, Mew will appear chasing Bubbles. If it is hit with a Pester Ball, it will Spin, Pose then disappear, which gives Todd a brief moment to capture a perfect picture. Clear pictures of Mew earns the player a large amount of points.

Check out these Pokemon Snap videos. The videos include the games trailer in HD, TV Commercials and more.

Get N or Get out! The official trailer for Pokémon Snap on the Nintendo 64, 1999

Moville Media showing us his very own Pokémon Snap station, these were kiosks in Blockbuster stores that allowed people to print their snaps taken ingame

A USA TV Commercial for Pokémon Snap which features the Pokémon Snap station, $3.00 per printed page of 16 stickers!

Due to the heavy promotion campaign of the game, done by Nintendo and Blockbuster, it managed to achieve tremendously successful sales. In fact, Pokémon Snap sold an excess of 151,000 copies within the first three days after its release. Pokémon Snap was the most rented game until 1999. It was also featured in the top 10 selling games in November 1999, in the USA. The game sold overall, 3.63 million copies, and is the perfect example of a well targeted promotion.